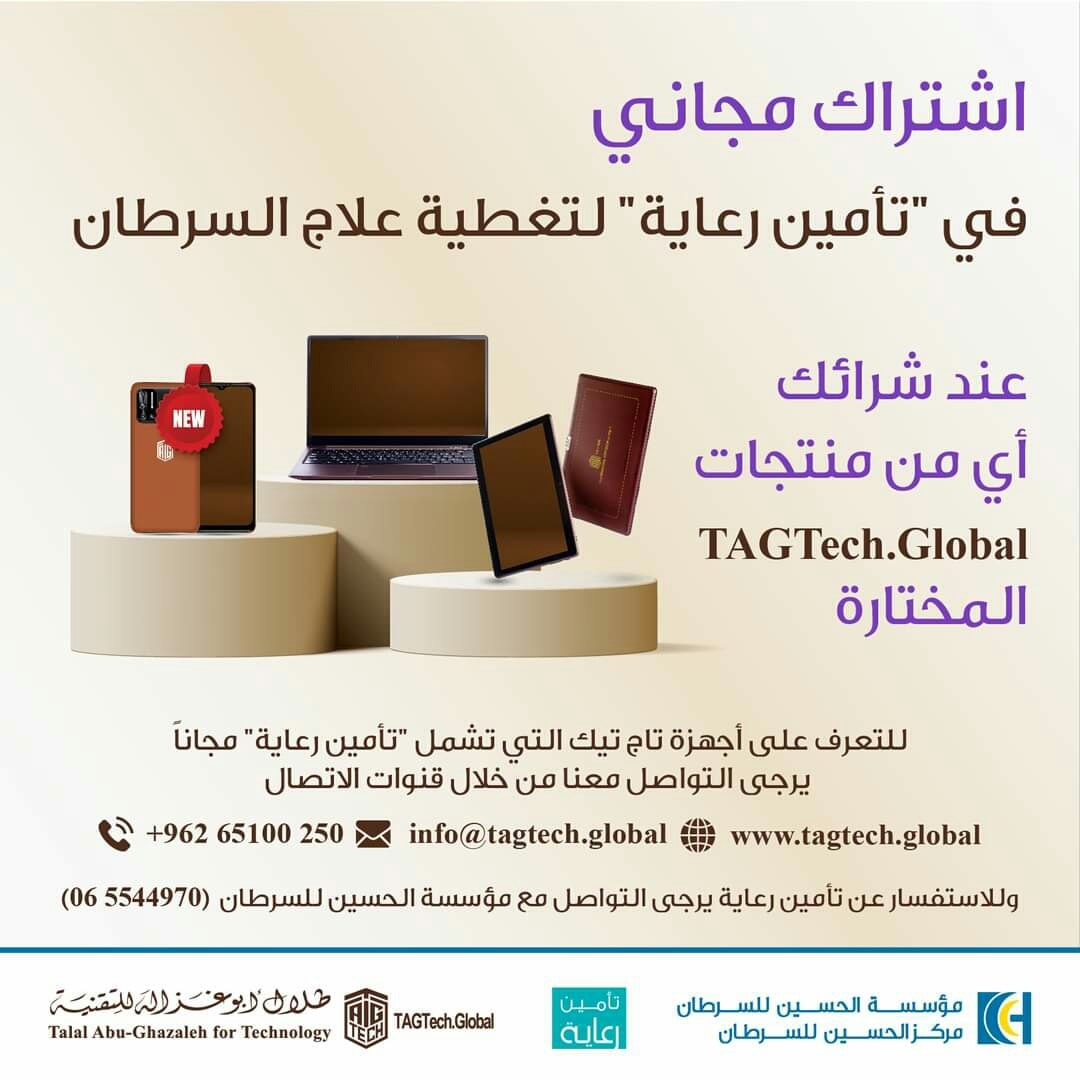 AMMAN – Talal Abu-Ghazaleh for Technology (TAGTech), a member of Talal Abu-Ghazaleh Global (TAG.Global), and the King Hussein Cancer Foundation (KHCC) have launched a campaign entitled ‘Cancer Care Insurance Program (CCP)’ with the aim of expanding insurance coverage for the treatment of cancer patients.
The campaign involves the purchase of the TAGTech Care package, which includes one of TAGTech's devices and a free insurance subscription to the CCP. Accordingly, TAGTech offers its clients a JD40  voucher for subscription in this insurance once purchasing specific products from its showrooms.
TAGTech offers its smart devices at its showrooms in Shmeisani, Abdul Rahim Al-Waked Street – Building No. 7, and at its showroom on Makkah Street, in addition to its large network of retailers throughout the Kingdom.
The campaign is launched to achieve common national and humanitarian objectives that TAG.Global constantly seeks to implement in cooperation with the King Hussein Cancer Center, as well as to activate the genuine partnership between the public and the private sectors.  This campaign affirms the keenness of HE Dr. Talal Abu-Ghazaleh, founder and chairman of TAG.Global, on supporting the Center’s efforts  in the fight against cancer.
Cancer Care Insurance Program is a nonprofit coverage program that provides cancer care coverage and guaranteed treatment at the King Hussein Cancer Center, one of the top cancer centers in the Middle East, as no other insurance company or provider in Jordan provides guaranteed cancer treatment coverage at the Center.
It should be noted that the King Hussein Cancer Foundation had previously signed a cooperation agreement with TAG.Global, with the aim of strengthening partnership and cooperation between the two parties in the areas of training, marketing, capacity building and exchange of expertise. A campaign to donate a certain percentage of the proceeds of the sales of devices produced by TAGTech was launched last year, for the benefit of disadvantaged patients at the Center.
It is worth mentioning that the Talal Abu-Ghazaleh for Technology (TAGTech) started manufacturing various electronic devices at its factories in China, reaching up to 20 different series so far, including laptops, tablets, smartphones and their accessories at more than 50-locations worldwide.
For further information about TAGTech smart devices, please visit the website: www.tagtech.global